Interview of Richard A. Bowers by Dian O. Belanger 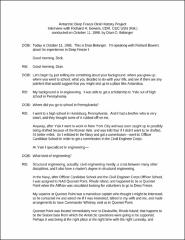 Lieutenant (jg) Richard A. Bowers, a structural engineer with the US Navy's Mobile Construction Battalion (Special), was the Officer-in-Charge of building an air operations facility for the IGY at McMurdo Sound during Operation Deep Freeze I (1955-56) and also the incomparably more difficult construction of South Pole Station, to be supported entirely by air-drop the following austral summer. Wintering over at McMurdo to prepare the 24-man construction crew, materials, and equipment for Pole, he also had charge of developing an ice runway at McMurdo for the heavy wheeled Air Force cargo aircraft. In November 1956 he led the advance party that landed by air on the polar plateau, located the geographic Pole, and in just over one month completed the station. For this achievement he was awarded the Morrell Medal, named for the Seabees founder Adm. Ben Morrell.