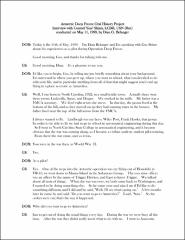 Pilot Gus Shinn first saw Antarctica during Operation Highjump. He took off in an R4D from the aircraft carrier Philippine Sea, the only pilot to land at Little America IV with ski-landing experience. Shinn volunteered for Deep Freeze I, but poor weather and insufficient gasoline forced the R4Ds and Albatrosses to turn back to New Zealand. The next year, with fuselage fuel tanks, he made it, even after reversing course to escort another pilot having electrical problems affecting navigation, although the first-in P2V crashed at McMurdo, with fatalities. On 31 October 1956, he piloted the first plane to land at the South Pole. Taking off again was marginal, but later in the season when it was warmer, he made more than a dozen more Pole landings. Shinn spoke candidly about pilot skill and attitude as well as politics and his own characteristic forthrightness that, in Deep Freeze III, cost him professionally.