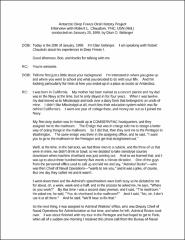 Yeoman Bob Chaudoin chose Antarctica for the adventure. After serving on Admiral Byrd's staff and then Task Force 43, he transferred to the Seabee battalion MCB (Special) for Deep Freeze I and sailed south on the Glacier. Working closely with Lcdr. D. W. Canham, McMurdo's officer in charge, he typed the station's daily journal (intended as a guide for later report writing) and handled other correspondence. He was a member of the South Pole construction crew and postmarked bags of philatelic mail there. Disappointed to not winter over at Pole, he later helped run the Navy's Antarctic office in Christchurch and accompanied Capt. Edwin MacDonald on a cruise in the Bellingshausen Sea.