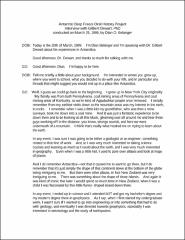 Drawn by the mystery of the unknown, geophysicist Gilbert Dewart signed on as a seismologist for the IGY. He wintered over at Wilkes Station where he set up the first of a network of seismograph stations for continuous earthquake coverage of the Antarctic. An elective satellite station about fifty miles inland on the icecap offered a recreational getaway and an opportunity for glaciologists to dig the deepest ice pit of the IGY. Dewart credited scientific leader Carl Eklund for the collegiality of the station and the numerous additional scientific and exploratory activities that were pursued. He wintered again, in 1960, with the Soviets at Mirny Station, where warm friendships overcame the political divides of the time. He accompanied an over-snow traverse to far-inland Vostok Station.