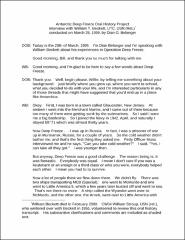 Utilitiesman, first class, Willie Beckett had charge of installing and maintaining the base utilities heating, plumbing, water-at Little America V during Deep Freeze I.. After wintering over, he drove a D-8 in the tractor train to establish Byrd Station in Deep Freeze II, where he also set up the utilities. Beckett wintered over three more times-at Byrd during DF IV and McMurdo during DF 61 and DF 63. He died in 2000.