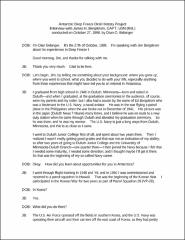 Navy pilot and then-Lieutenant Jim Bergstrom volunteered for Operation Deep Freeze I as a GCA (Ground Controlled Approach) officer to guide incoming aircraft attempting to land on the ice in poor visibility. As officer-in-charge of the advance party, he arrived at McMurdo on the icebreaker Edisto in December 1955 and helped in the building of the station. He was Executive Officer of the wintering-over party. When plowing seemed the only way to prepare an ice runway in time for the spring planes, and the prospects iffy, the leadership team reorganized the entire camp to keep snow-removal crews going around the clock. Bergstrom, like other officers, did mess cooking. He fell, shattering both elbows in April 1956, just at the onset of the winter night, but recovered sufficiently to resume his duties and, later, his naval career.