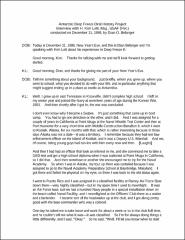 Twenty-year-old Seabee equipment operator Kim Lett, after brief tractor training on the Greenland icecap, arrived at Little America V to winter over in Deep Freeze II-III. When an underwater projection on the high barrier prevented ship-unloading, he volunteered to help blast it free only to be nearly carried away as the bad ice cracked up. He described snow-melter and fire-watch duty, that included filling the camp stoves with diesel fuel, and having to preheat the heavy vehicles. He assisted with aurora observations and sang in a quartet with Soviet meteorologist Vladimir Rastorguev. In the spring he volunteered to help plow the essential McMurdo runway. He then spent the summer at Hallett Station, remembering the ice so slick on landing that neither he nor the plane could get traction. Lett was probably the only person to work at three IGY stations in a single year.