Interview of Robert B. Thomson by Dian O. Belanger 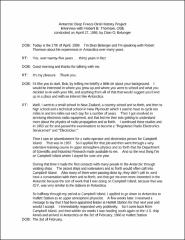 New Zealand-born Robert Thomson began his long Antarctic career as an IGY radio operator and electronics technician on Campbell Island. When he applied to be an upper atmosphere physicist at jointly run (US-NZ) Hallett Station, he was appointed scientific leader there for 1960, followed by a summer as leader at Scott Base, which he would do again in 1963-64. He wintered over in 1962 as scientific leader of the now-Australian station Wilkes and led an over-snow traverse to the Soviets' Vostok Station. Navigating by sunshots plotted on graph paper, he arrived precisely on target. In 1968 he established Vanda Station in the Dry Valleys. Thomson headed New Zealand's Antarctic Research Program from 1965 until 1988. During that time, he was a delegate to every Antarctic Treaty meeting, and in alternate years to the Scientific Committee on Antarctic Research (SCAR), where he was secretary chairman of the logistics working group. He made 78 trips to Antarctica and received numerous royal and other honors.