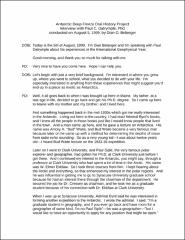 Paul Dalrymple wintered over at Little America V in 1957 as an IGY micrometeorologist, which meant that he studied weather phenomena at close intervals near (above and below) the snow surface. He enjoyed the international flavor of the station, with its Weather Central and other personnel from several countries. So excited was he by the physical beauty and scientific potential of Antarctica that he elected to spend a second year, this time at the South Pole where analysis of his data later earned him a doctorate. Dalrymple contrasted the leaders’ substance and style over the two years and noted the numerous differences in camp life and management necessitated by the widely varying sizes of the stations.