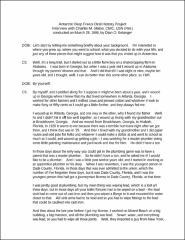 On his own from childhood, Charles Slaton, called Slats, had mastered several trades as a civilian and in the Navy by the time he volunteered for Deep Freeze I. By then he was a chief construction mechanic whose cold-weather experience in the Arctic prompted him to insist on modifications to the heavy equipment and testing that later paid off. He supervised equipment maintenance and repair and moving offloaded cargo across the ice to the McMurdo base. During the dark winter, he kept the lone D-8 and the young runway-plowing crews going while preparing equipment for the South Pole where, in Deep Freeze II, he retrieved airdropped material, leveled building sites and a ski runway (using an abandoned tractor he had personally rebuilt), and helped in all phases of the station-building. The blunt and outspoken but tender-hearted Slaton was proud that the construction crew "beat their schedules so bad," finishing in little more than a month. He died in 2001.