Interview of Charles A. Bevilacqua by Dian O. Belanger 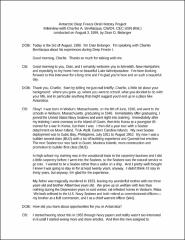 Seabee builder Charlie Bevilacqua used his expertise in erecting Quonset huts to win a place on an already filled Deep Freeze I roster. He became the chief builder for the McMurdo base when the senior chief was sent home following a tragic drowning. Wintering over, he inspected and repaired prefabricated building panels and cut trusses apart to allow for airdrop at the South Pole. At Pole, he oversaw the construction of the camp buildings on the snow, digging some in to keep the roofs at one level. McMurdo's leaders greatly impressed Bevilacqua. He took an active part in building the unplanned chapel and helped also with New Zealand's Scott Base.