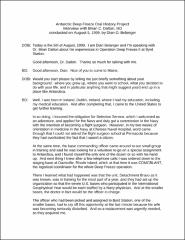 Dr. Brian Dalton had scarcely arrived in the United States from his native Ireland for additional medical studies when he was drafted for military service. Obtaining a commission as a Navy lieutenant, he quickly volunteered for Antarctic duty, to experience an adventure that few would ever know. A last-minute and inexperienced substitute, he became the physician and officer-in-charge of Byrd Station over the winter of 1957, when the IGY began. Among Dalton's challenges were the fact that numerous building and food supplies and, especially, beer never arrived at the tiny inland outpost. Despite the spartan conditions and social divisions along educational lines, the camp remained generally peaceable although news of the privation brought Admiral Dufek himself on an inspection visit in the spring. Dalton's worst medical emergency was burns to his own hands when a spirit lamp exploded.