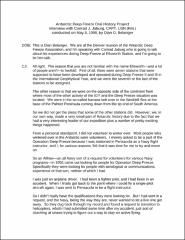 In this impromptu interview, Con Jaburg talked about his Deep Freeze II-III experiences at Ellsworth Station. A descendant of Sir James Ross, discoverer of the Great Barrier now called the Ross Ice Shelf, Jaburg was a VX-6 pilot qualified to fly both single-engine Otters and helicopters. He recalled the ships' getting beset in thick ice, having to choose an alternate station site, and the rush to get everything under cover before winter. He assessed the ongoing tensions that developed with Finn Ronne, who was both the military and scientific leader of the station-his censoring of outgoing messages, thwarting the IGY science program, petty actions that united the base against him. Jaburg also talked about air support for the summer traverse operations.