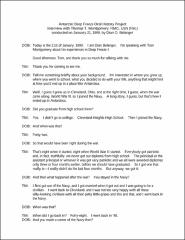 Radioman "Monty" Montgomery, who never went to radio school, was ordered to the staff of Task Force 43 as soon as he volunteered for Antarctica and, after helping to write plans and orders and select amateur radio equipment, to MCB (Special). He was a member of the advance party at McMurdo in Deep Freeze I, where he operated from a tent at first to relay communications between ship and shore. He discussed radio schedules, atmospheric radio blackouts, and fast exchanges in Morse code with Russian and French radiomen to receive their synoptic weather observations, code lingo overcoming normal language barriers. After his official Navy communications shift, Montgomery spent hours on ham radio, contacting US radio amateurs who would patch through to Antarcticans' families. The following summer he was one of two radiomen in the South Pole advance party.