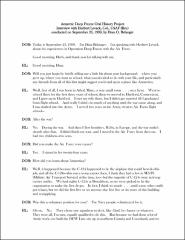 Herb Levack's Air Force troop carrier squadron was chosen for air support of the inland IGY stations beginning in Deep Freeze II because its C-124s were the largest and most suitable cargo aircraft at the time, and his unit had had experience landing materials in the Arctic for the DEW Line. Levack, a pilot and the operations officer, discussed loading and flying the planes to the Pole (and Byrd), the mechanics and timing of the low-altitude drops, and having to retreat to New Zealand when the ice runway deteriorated until colder weather and ice repair made the airstrip safe again. In Deep Freeze IV, four C-124s returning from Pole and Byrd made safe emergency landings at Hallett when weather turned foul at McMurdo, but just a week later a similar plane coming from Christchurch smashed into a nearby mountain with six fatalities.