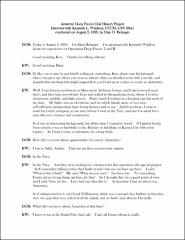 Navy electrician Ken Waldron was nineteen when he volunteered for Antarctica. At Little America V in Deep Freeze I, he was first a tractor driver moving supplies to the station, which he then helped build and wire. He explained freezing antenna poles into the snow and trusting them to be climbable, planning any work to minimize time bare-handed in the cold. Waldron elected not to stay, but after a northern summer back at the Seabee base in Davisville, RI, he asked to winter over with the first group at the South Pole. Attending generator school at Peoria proved unexpectedly but critically useful when responsibility for that operation became solely his. Making up wiring connections and measurements indoors helped him complete an installation before the wire froze. He admired the ingenuity and work ethic of his peers and the leadership of Drs. Siple and Taylor and Lt. Tuck. He learned and grew at weekly lectures-scientific, medical, historical, technical-especially the one he gave on electricity.