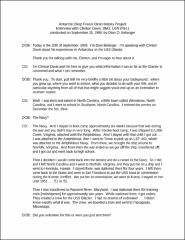 Clinton Davis was ordered to the new icebreaker Glacier a few weeks before its commissioning in May 1955, and he remained with the ship until 1963, its longest-serving crew member. He recalled the rolling ride in rough seas, the jolting percussion of icebreaking, the twenty-four-hour daylight, the heroes welcome in home-port Boston after the first season in Antarctica. On its maiden voyage, the Glacier towed YOG-34, an oiler intended for freezing in as a fuel farm. When lesser icebreakers failed, it broke a channel to permit building McMurdo at Hut Point. As a bosuns mate Davis had responsibility for the upkeep of the ship, exterior and interior. He acknowledged the racism of the time but rose above it with an easy-going nature while meaning what he said.