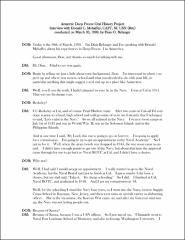 Lieutenant Donald Mehaffey was the wintering supply officer for MCB (Special) during Deep Freeze I. Working closely with Chief Hess and other chief petty officers (whom he greatly respected), he coordinated all supplies-food, clothing, shelter, even dogs-for McMurdo, Little America, Byrd, and Pole stations, and devised a "beautiful" color-coded supply system and a supply dump "laid out in perfect coordinates." However, on arrival at Little America, in an effort to unload quickly, supplies were dumped at a temporary site on the bay ice. When weather threatened to break up the ice, all hands scrambled to move the materials onto the ice shelf. But order gave way to chaos in the rush. Then it snowed, covering up the mess. Fortunately, an aerial photograph before dark helped in the endless digging out, and nothing important was lost. Because of the relative magnitude of their supply problems, Mehaffey believed ever after that he should have been sent to McMurdo instead of Little America.