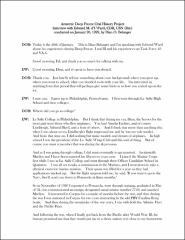 Ed Ward's north polar flying experience brought him to Admiral Dufek's attention when the latter began organizing Operation Deep Freeze in October 1954. He became its first staff member and the acting commanding officer of the Antarctic air squadron VX-6, which he had less than a year to organize, staff, and equip with suitable, available aircraft. In Deep Freeze II, now executive officer of VX-6, he flew an R5D from New Zealand to McMurdo on 17 October 1956, landing after a harrowing fourteen-hour flight just minutes after the fatal crash of a P2V. He flew seven long-range photo missions over Antarctica, and after deterioration of the ice runway forced the wheeled R5D to return to Christchurch, he made similar but shorter-range reconnaissance flights in a ski-equipped Otter. He recalled the beauty of the polar continent, the difficulties of polar flying-the lack of normal navigational aids, whiteout conditions, radio blackouts, fierce and changeable weather.