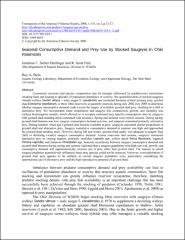 Funding for this research was provided by the Ohio Department of Natural Resources, Division of Wildlife; Federal Aid in Sport Fish Restoration Project F-69-P, Fish Management in Ohio; and the Department of Evolution, Ecology, and Organismal Biology at The Ohio State University.