Damage to Cauliflower Coral by Monofilament Fishing Lines in Hawaii 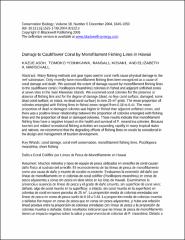 Many fishing methods and gear types used in coral reefs cause physical damage to the reef substratum. Only recently have monofilament fishing lines been recognized as a cause of coral damage and death. We assessed the extent of damage caused by monofilament fishing lines to the cauliflower coral ( Pocillopora meandrina) colonies in fished and adjacent unfished zones at seven sites in the main Hawaiian islands. We examined coral colonies for the presence or absence of fishing line and for the degree of damage (dead, no live coral surface; damaged, some dead coral surface; or intact, no dead coral surface) in nine 25-m2 grids. The mean proportion of colonies entangled with fishing lines in fished zones ranged from 0.18 to 0.44. The mean proportion of dead or damaged colonies was higher in fished than adjacent unfished zones, and there was a positive linear relationship between the proportion of colonies entangled with fishing lines and the proportion of dead or damaged colonies. These results indicate that monofilament fishing lines have a negative impact on the health and survival of P. meandrina colonies. Because tourism and related recreational fishing activities are expanding rapidly in many tropical states and nations, we recommend that the degrading effects of fishing lines on corals be considered in the design and management of tourism development.