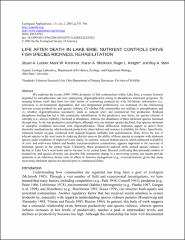 We explored the recent (1969–1996) dynamics of fish communities within Lake Erie, a system formerly degraded by eutrophication and now undergoing oligotrophication owing to phosphorus abatement programs. By merging bottom trawl data from two lake basins of contrasting productivity with life-history information (i.e., tolerances to environmental degradation, diet and temperature preferences), we examined (1) the relationship between system productivity and species richness, (2) whether fish communities are resilient to eutrophication, and (3) whether oligotrophication necessarily leads to reduced sport and commercial fish production. Reduced phosphorus loading has led to fish community rehabilitation. In the productive west basin, six species tolerant of eutrophy (i.e., anoxia, turbidity) declined in abundance, whereas the abundance of three intolerant species increased through time. In the less productive central basin, although only one tolerant species declined, four species intolerant of eutrophic conditions recovered with oligotrophication. These differential responses appear to derive from dissimilar mechanisms by which reduced productivity alters habitat and resource availability for fishes. Specifically, enhanced bottom oxygen, combined with reduced biogenic turbidity and sedimentation, likely drove the loss of tolerant species in the west basin by reducing detrital mass or the ability of these species to compete with intolerant species under conditions of improved water clarity. In contrast, reduced bottom anoxia, which enhanced availability of cool- and cold-water habitat and benthic macroinvertebrate communities, appears important to the recovery of intolerant species in the central basin. Ultimately, these productivity-induced shifts caused species richness to decline in Lake Erie’s west basin and to increase in its central basin. Beyond confirming that unimodal models of productivity and species diversity can describe fish community change in a recovering system, our results provide optimism in an otherwise dismal state of affairs in fisheries management (e.g., overexploitation), given that many recovering intolerant species are desired sport or commercial fishes.

Support for this work was provided by (1) Federal Aid in Sport Fish Restoration F-69-P (to R. A. Stein), administered jointly by the U.S. Fish and Wildlife Service and ODNR-ODW, (2) the Department of Evolution, Ecology, and Organismal Biology at The Ohio State University, and (3) a Presidential Fellowship awarded to S. A. Ludsin by The Ohio State University.