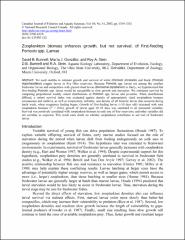 We used otoliths to estimate growth and survival of white (Pomoxis annularis) and black (Pomoxis nigromaculatus) crappie larvae in five Ohio reservoirs. Because Pomoxis spp. larvae are among the smallest freshwater larvae and competition with gizzard shad larvae (Dorosoma cepedianum) is likely, we hypothesized that first-feeding Pomoxis spp. larvae would be susceptible to slow growth and starvation. We estimated survival by comparing proportional weekly cohort distributions of Pomoxis spp. larvae and juveniles. When distributions differed, a cohort survival index was evaluated against density of appropriately sized zooplankton biomass (crustaceans and rotifers), as well as temperature, turbidity, and density of all limnetic larvae that occurred during hatch week, when exogenous feeding began. Growth of first-feeding larvae (<10 days old) increased with total zooplankton biomass (r2 = 0.64); growth of larvae aged 10–16 days was unrelated to all measured variables. Survival was positively correlated with zooplankton biomass in only one of four reservoirs, and other variables did not correlate as expected. This result casts doubt on whether zooplankton contributes to survival of freshwater larvae.

This research was funded by Federal Aid in Sport Fish Restoration Project F-69-P, administered jointly by U.S. Fish and Wildlife Service and Ohio Department of Natural Resources, Division of Wildlife, National Science Foundation grant DEB 9726877 to RAS and MJG, and the Department of Evolution, Ecology, and Organismal Biology at The Ohio State University.