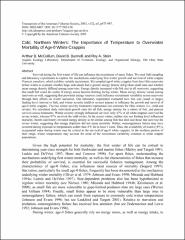 McCollum, Arthur B.
Bunnell, David B.
Stein, Roy A.

Survival during the first winter of life can influence the recruitment of many fishes. We used field sampling and laboratory experiments to explore the mechanisms underlying first winter growth and survival of white crappie Pomoxis annularis, which exhibits variable recruitment. We sampled age-0 white crappies from four Ohio reservoirs before winter to evaluate whether large individuals had a greater energy density (kJ/g) than small ones and whether mean energy density differed among reservoirs. Energy density increased with fish size in all reservoirs, suggesting that small fish could die earlier if energy stores become limiting during winter. Mean energy density varied among reservoirs as well, suggesting that prewinter energy reserves could influence recruitment variability across reservoirs through their effects on winter starvation. Our laboratory experiment evaluated how fish size (small or large), feeding level (starved or fed), and winter severity (mild or severe) interact to influence the growth and survival of age-0 white crappies. The two winter severity treatments represented two extremes for Ohio winters (i.e., mild and severe). We calculated daily individual growth rates for all fish, energy density for a subset of fish, and percent survival across treatments. Winter severity strongly influenced survival: only 47% of all white crappies survived the severe winter, whereas 97% survived the mild winter. In the severe winter, neither size nor feeding level influenced mortality. Bomb calorimetry revealed energy density to be similar among fish that died and those that survived the severe winter, suggesting that energy depletion did not cause mortality. Rather, osmoregulatory failure may have occurred during exposure to temperatures colder than 4°C for at least 1 week. Thus, the availability of warm (≥4°C), oxygenated water during winter may be critical to the survival of age-0 white crappies. In the northern portion of their range, winter temperatures may account for some of the recruitment variability common to white crappie populations.

This research was funded by Federal Aid in Sport Fish Restoration Project F-69-P, administered jointly by U.S. Fish and Wildlife Service and Ohio Department of Natural Resources, Division of Wildlife, and the Department of Evolution, Ecology, and Organismal Biology at the Ohio State University.