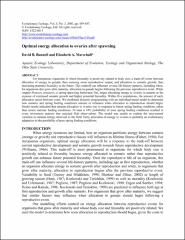 Bunnell, David B.
Marschall, Elizabeth A.

This research was funded in part by Federal Aid in Sport Fish Restoration Project F69- P, administered jointly by the United States Fish and Wildlife Service and the Ohio Department of Natural Resources, Division of Wildlife.