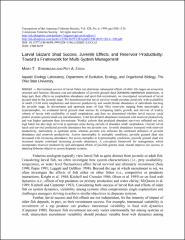 This work was funded by the Department of Evolution, Ecology, and Organismal Biology at The Ohio State University, Electric Power Research Institute grant 91-07; National Science Foundation grants DEB 9107173 and DEB 9407859; and the Federal Aid in Sport Fish Restoration Project F-69-P, administered jointly by the U.S. Fish and Wildlife Service and the Ohio Division of Wildlife.