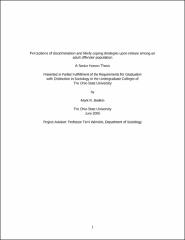 Sociologists have long been intrigued by the study of deviant behavior. At one time, sociologists greatly benefited from conducting research in the prisons by testing old theories of deviance and formulating new ones. The purpose of this research is to follow that tradition by examining an adult offender population, focusing on inmate perceptions of discrimination and potential coping strategies to combat the label “ex-con” when released. Labeling theory posits that before a person goes to prison, the person has conceptions of what society thinks about prisoners. When an inmate is sentenced to prison, these beliefs become relevant and lower self-esteem and fear of rejection by others are possible outcomes of the beliefs. These outcomes, in turn, can lead to the inmate choosing to adopt secrecy as a coping strategy to combat the label. We constructed a 55-item questionnaire that measured demographic characteristics and used scales measuring inmates’ perception of discrimination and likely coping strategies adopted from Link et al’s (1987) research on mental patients. The results of this research show that minority inmates perceive less discrimination than whites, and as a result are less likely to adopt secrecy as a coping strategy. Furthermore, those inmates with more social support are also less likely to adopt secrecy. This demonstrates that if a formally labeled inmate already has one label, adding another does not have a significant detrimental effect.