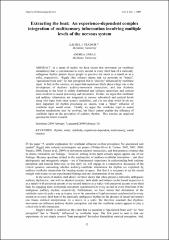 In a series of studies we have shown that movement (or vestibular stimulation) that is synchronized to every second or every third beat of a metrically ambiguous rhythm pattern biases people to perceive the meter as a march or as a waltz, respectively. Riggle (this volume) claims that we postulate an "innate", "specialized brain unit" for beat perception that is "directly" influenced by vestibular input. In fact, to the contrary, we argue that experience likely plays a large role in the development of rhythmic auditory-movement interactions, and that rhythmic processing in the brain is widely distributed and includes subcortical and cortical areas involved in sound processing and movement. Further, we argue that vestibular and auditory information are integrated at various subcortical and cortical levels along with input from other sensory modalities, and it is not clear which levels are most important for rhythm processing or, indeed, what a "direct" influence of vestibular input would mean. Finally, we argue that vestibular input to sound location mechanisms may be involved, but likely cannot explain the influence of vestibular input on the perception of auditory rhythm. This remains an empirical question for future research.