A Simpler Explanation for Vestibular Influence on Beat Perception: No Specialized Unit Needed 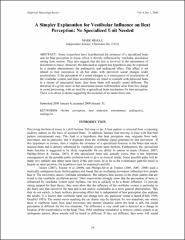 Some researchers have hypothesized the existence of a specialized brain unit for beat perception in music which is directly influenced by vestibular stimulation arising from motion. They also suggest that the unit is involved in the entrainment of movement to music. However, the data used to support this hypothesis may be explained by a simpler phenomenon: the audiogravic and audiogyral effect. This effect is not related to beat perception at all but deals with perceived sound changes under accelerations. If the perception of a sound changes as a consequence of acceleration of the vestibular system, and those accelerations are timed to coincide with particular beats in a stream of unaccented beats, then those beats will actually sound different. The detection of a given meter in that unaccented stream will therefore arise from this change in sound processing, with no need for a specialized brain mechanism for beat perception. There is no direct evidence supporting the existence of an innate brain unit.