Pasture recovery by broadcast seeding after pugging damage from heifers 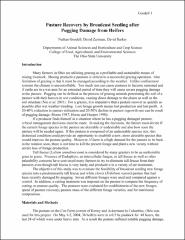 The recovery of pastures damaged by pugging (wet weather treading) is critical in a grazing operation. This study examined the recovery and performance of a predominantly tall fescue (Lolium arundinaceum) and white clover (Trifolium repens) pasture that had been damaged by pugging. The pasture was broadcast seeded using various forages with the intent of trying to speed the pasture recovery and establish a more desirable forage mix that will compete with the endophyte infected tall fescue and improve the pasture quality. The forages that were used are alfalfa (Medicago sativa), red clover (Trifolium pratense), birdsfoot trefoil (Lotus corniculatus), perennial ryegrass (Lolium perenne), two varieties of orchardgrass (Dactylis glomerata) and chicory (Cichorium intybus). Plots were evaluated for plant establishment, pasture mass and nutritional value in a randomized complete block design. In addition, plots were divided into two halves with one half being cut twice as frequently as the other to compare the effects of cutting frequency. The results showed that new forage varieties were established (P. Ryegrass - 214 plants/m2, Orchardgrasses - 167 plants/m2, Alfalfa - 115 plants/m2, Chicory – 50 plants/m2, Red Clover 16 plants/m2, and Birdsfoot Trefoil – 0 plants/m2). Their establishment was associated with there germination rates in the lab. Recovery time was not affected by the newly seeded varieties. In addition, no association was established between the treatments and the nutritional analysis. Analysis of variance showed a significant difference between pasture mass of the forage treatments and the cutting treatment. Broadcast seeding in a pugging damaged pasture is a simple and low cost way of establishing a new species mix into a predominantly tall fescue sward.

Except where otherwise noted, this item's license is described as Attribution 2.0 Generic