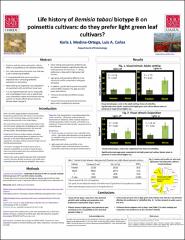 The silverleaf whitefly (SLWF), Bemisia tabaci biotype B, is one of the most prevalent insect pests found attacking poinsettias. Ohio is the fifth largest producer of poinsettias in the nation with poinsettias ranking as the nation’s top selling potted ornamental. Little is known about the physical and chemical traits present in poinsettia cultivars that affect whitefly life history; however, my previous work has shown poinsettia cultivars differ in susceptibility to the silverleaf whitefly. Over all, dark colored leaves significantly have less whitefly survival and adults settling compared to light colored leaf poinsettias. It is hypothesized that visual cues play an important role in attracting whiteflies populations in poinsettias. To further investigate plant factors involved in susceptibility to whiteflies a visual cues choice experiment was conducted with one dark green leaf and one light green leaf cultivar, were adult settling and oviposition were measured. It is also hypothesized that amino acid profile and morphological traits such as trichome density, specific leaf area, and chlorophyll content are factors affecting host choice by the SLWF. Our study shows adult settling and oviposition preference by the SLWF is significantly affected by the presence of visual cues. A strong preference is observed for light green leaf cultivars. Light green leaf poinsettias differed in the amino acid profile compared to dark green leaf plants. In addition, specific leaf area and chlorophyll content differs between the cultivars. Trichome density did not differ among cultivars. Visual, chemical and physical characteristics play a role in whitefly host selection.