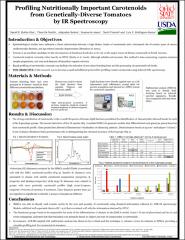 The objective of this research was to develop a protocol for profiling tomato carotenoids based on their specific vibrational spectroscopic signatures. Twenty four tomato varieties that included eight groups of genetically manipulated carotenoid varieties (high trans-lycopene, poly-cis-lycopene, β-carotene, poly-cis-β-carotene, δ-carotene, tangerine virescent, alcabaca-tangerine, and a low-carotenoid control sample) were grown and harvested in a replicated trial. Hexane was used to extract the lipid fraction from samples, and the extract was directly applied onto an ATR ZnSe crystal plate for spectra acquisition and injected in a reverse phase HPLC system for carotenoid separation. SIMCA classified tomatoes based on unique infrared spectral signatures. Models exhibited tight and well-separated clusters (interclass distances >3.0) that correlated well with the information obtained by HPLC, and demonstrated the capability to classify tomatoes based on variety and carotenoid profile. Classification of lipid fractions was primarily based on the presence of trans double bonds and their cis and trans conjugations. Major discriminating bands were 957cm-1 and 964cm-1 associated with bending trans HC=CH out-of-plane deformation vibrations of carotenoids. ATR-IR and multivariate analysis provided a simple, rapid and high-throughput tool for the identification of dietary carotenoids. This technique will facilitate the effective selection of tomato varieties with specific pigment content, improving the screening process for carotenoid-rich products.