Retention and bioaccessibility of β-carotene in cassava (Manihot esculanta, Crantz) are affected by style of cooking 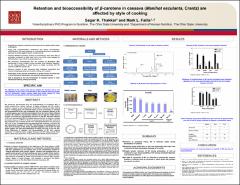 We previously demonstrated that the bioaccessibility of β-carotene (BC) in boiled cassava from various cultivars is highly correlated with BC content. However, cassava is also prepared by fermentation followed by either boiling (fufu) or roasting (gari). The potential impact of such processing on retention and bioaccessibility of BC was investigated. We first compared retention of BC in boiled cassava, gari, and fufu each prepared from the roots of three different cultivars. BC content in unprocessed cultivars was 6-8 µg/g wet weight and cis isomers accounting for approximately one-third of total BC. Apparent retention of BC was approximately 90% for boiled cassava and fufu. In contrast, roasting fermented cassava at 195°C for 20 min to prepare gari decreased BC content by 90%. Retention was increased to 63% when roasting temperature was reduced to 165°C for 10 min. Processing also was associated with a decline in all trans ¬BC and concomitant increase in 13-cis BC. The efficiency of micellarization of all trans and cis isomers of BC during simulated digestion was 25-30% for both boiled cassava and gari and independent of cultivar, but only 12-15% for fufu. These differences in retention and bioaccessibility of BC from cassava processed in traditional styles suggest that gari and fufu likely provide fewer retinol activity equivalents than an equivalent caloric intake of boiled cassava.