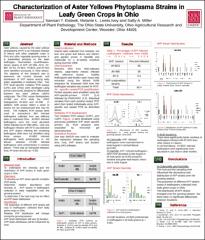 Aster yellows, caused by the aster yellows phytoplasma (AYP) is an important disease of lettuce and other vegetable crops in Ohio and other vegetable growing areas. It is transmitted primarily by the aster leafhopper, Macrosteles quadrilineatus. Seven strains of AYP (AY-WB, AY-S, AY-BW, AY-SS, AY-BD2, AY-BD3, and AY-SG) were identified previously in Ohio lettuce. The objective of this research was to determine the current diversity and distribution of AYP strains among leafy green vegetables in northwest Ohio. Two AYP strain-specific multiplex PCR assays (CPA1 and CPA2) were developed using primers previously designed to differentiate between two aster yellows (16SrI) subgroups. The CPA1 assay distinguishes AY-WB and AY-S while the CPA2 distinguishes AY-BD2 and AY-WB. In addition, both assays detect a strain or strains not yet characterized that may be novel. The multiplex PCR assays were used to characterize 584 infected leafhoppers collected from two different sites in northwest Ohio. AY-BD2 infected leafhoppers were the most abundant (55%) followed by AY-WB (36%). Only one leafhopper infected with AY-S was detected and AYP strains infecting the remaining leafhoppers (9%) were not identified using these assays. AY-BD2 infected leafhoppers were predominant in red lettuce, whereas AY-WB infected leafhoppers were predominant in romaine lettuce. There was an interaction between host, AY-strain and site (p= 0.00). My abstract was reviewed by Dr. Sally Miller – email: miller.769@osu.edu