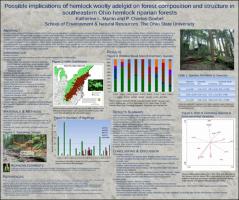 Hemlock woolly adelgid (HWA) is an invasive, exotic insect causing widespread mortality in eastern hemlock (Tsuga canadensis (L.) Carr) forests of the eastern United States. Eastern hemlock is thought to be a foundation species, regulating local ecosystem structure and function (e.g., microclimate, nutrient cycling). Prior to any possible invasions by HWA, we are sampling the vegetation composition and structure of hemlock forests of the unglaciated Allegheny Plateau region of Ohio. This data will provide a baseline for planning and prevention, which may be particularly valuable to a region with a significant tourism and recreation investment in hemlock-dominated ravine systems. Initial analyses indicate that hemlock forest ecosystems in southeastern Ohio may respond to large-scale disturbance associated with HWA differently than models developed for the northeastern United States. In southeast Ohio, eastern hemlock is associated with short, steep slopes or cliffs and does not seem to be limited by aspect. Hemlock is particularly dominant at lower slope positions adjacent to streambeds, where few other woody species are found in either the overstory or sapling layers. Unlike New England and some areas of the southern Appalachians, sweet birch is not a significant forest component in the overstory or sapling layers. Rather, species such as red maple and Amercian beech (Fagus grandifolia Ehrh.) present in the sapling layer may be more likely to replace hemlock if HWA reaches these forest stands.