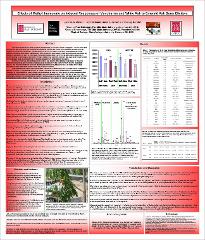 The emerald ash borer (EAB) (Agrilus planipennis), an invasive wood-boring pest, has the potential to eliminate ash (Fraxinus spp.) from North American forests and urban environments. Recent findings suggest an Asian ash species (F. mandshurica) is resistant to attack from EAB while North American species, including white ash (F. americana), are susceptible. Resistance of deciduous trees to wood-boring beetles is attributed, in part, to secondary metabolite induction (i.e. phenolics) in phloem tissues upon insect feeding. Knowledge of phloem chemistry differences between resistant and susceptible ash species may ultimately lead to development of rational management strategies for this pest. Previous work has shown that insect elicitors can induce plant defense responses to chewing herbivores (like EAB) and that these responses are mediated by the phytohormone methyl jasmonate (MeJA). We hypothesized that resistant Manchurian ash accumulates phenolics at higher levels than susceptible white ash when induced with MeJA and/or elicitors. High performance liquid chromatography was used to identify phenolic changes within and between species. In total, 31 compounds (seven of which were shared by the two species) were quantified in response to the treatments. MeJA induced accumulation of total and individual phenolics in both species. Furthermore, Manchurian ash contained higher levels of total phenolics than white ash while there was significant variation in concentrations of shared compounds between species. Surprisingly, treatment with EAB elicitors had no effect. These results are discussed in the context of known models of plant defense.

US Forest Service and OARDC