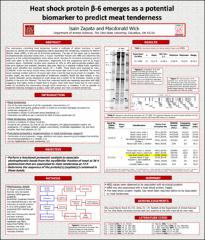 The mechanisms controlling meat tenderness involve a multitude of cellular functions. A novel approach to identify the protein(s)/peptide(s) bands associated with tenderness, measured by Warner Bratzler Shear (WBS), is the use of functional proteomics. The aim of this study was to associate electrophoretically separated bands from a muscle myofibrillar fraction with WBS and determine the sequence of the protein(s)/peptide(s) within those bands. Samples for functional proteomics and for WBS were taken at 36h and 72h postmortem, respectively from the Longissimus dorsi of 22 Angus crossbred steers. Myofibrillar fractions were resolved on 10% to 20% poly-acrylamide gradient gels. Gels were digitized and analyzed. Resulting data were fitted by a stepwise multiple linear regression model which identified two significant bands (R2 = 0.508). These bands were analyzed by nano-LC/MS/MS. In the first band, myosin heavy chain and myosin light chain 2 were identified. The second band contained multiple isoforms of myosin light chain 2 and the heat shock protein β-6 (hspb6). This protein, hspb6, has never been associated to tenderness variability. Hspb6 has been related, in vivo, to muscle relaxation during situations of acute stress and is known to be intimately involved in the stability of the actin thin filament. The band that contained hspb6 was negatively associated with WBS suggesting that higher levels of hspb6 lead to tougher meat while lower levels lead to more tender meat. By identifying the mechanisms through which tenderness is mediated, it will be possible to implement breeding strategies to produce cattle with greater and more consistent tenderness.