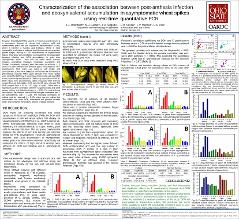 Fusarium head blight (FHB), caused by Fusarium graminearum, is a destructive disease of wheat that reduces yield and contaminates grain with the mycotoxin deoxynivalenol (DON), which is harmful to humans and livestock. Wheat is most susceptible to infection at anthesis, but infections can occur at later growth stages, leading to DON contamination of asymptomatic spikes. This study was conducted to characterize the association between infection and DON accumulation in grain from asymptomatic spikes. Three soft red winter wheat cultivars (Cooper, susceptible; Hopewell, moderately susceptible; and Truman, moderately resistant) were inoculated at anthesis, 1, 2 and 3 wk after anthesis with different spore concentrations of F. graminearum. FHB index was rated at soft dough, and asymptomatic spikes were tagged at hard dough and harvested at physiological maturity. Milled grain samples from these spikes were tested for DON and F. graminearum biomass was quantified in each sample by amplifying Tri5 DNA using quantitative RT-PCR. DON values from asymptomatic spikes inoculated after anthesis ranged from not detectable (<0.05 ppm) to 3.1 ppm, whereas Tri5 DNA ranged from 0.02 to 2.53 ng/g of grain. There was a significant positive correlation between fungal biomass and DON across cultivar and infection timing (r = 0.69). For post-anthesis inoculations, the infection time with the strongest correlation was 1 wk post-anthesis, with r = 0.86. The strongest correlation for cultivar was for Hopewell (r = 0.62), which was the cultivar that accumulated the most DON, manifested the greatest disease index, and contained the greatest amount of fungal biomass.