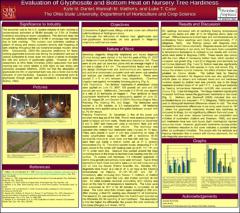 The economic cost to the U.S. nursery industry of bark cracking is conservatively estimated at $6.6M annually (or 2.5% of finished inventory) according to recent calculations. In 2005 researchers at Ohio State University (OSU) speculated that bark cracking was not solely related to cold injury as was widely and previously accepted (Mathers, 2006) but that the absorption of glyphosate into thin or pigmented-bark was also a factor due to the reduction of cold hardiness. There were two objectives to this study: 1) determine if glyphosate, tillage and sod cover can affect the cold hardiness of field grown trees; and, 2) evaluate the influence of bottom heat and glyphosate and non-glyphosate treatments on root growth in Magnolia virginiana and Cornus kousa. Previous research supports that hardiness should be reduced by sub-lethal dosing with glyphosate (Stasiak et al, 1991); however, this is the first conclusive study indicating glyphosate reduces root hardiness in Cornus kousa but not in Magnolia virginiana. This is also the first report of Magnolia virginiana roots expressing no root dormancy and producing significant biomass during the period of shoot dormancy. In contrast, Cornus kousa roots exhibited dormancy and even deteriorated when placed in elevated root zone temperatures of 17C. This was interesting as the effect of glyphosate treatments was most pronounced on Cornus versus Magnolia, indicating species variability in susceptibility to glyphosate causing increased cold susceptibility via possible inhibition of root dormancy.