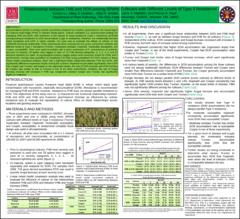 Relationship between FHB and DON among SRWW Cultivars with Different Levels of Type II Resistance.pdf (234.3Kb)

Deoxynivalenol (DON) is among several mycotoxins produced by Fusarium graminearum, the causal agent of Fusarium head blight (FHB), in infected wheat spikes. Cultivar resistance is a recommended strategy for managing FHB and DON, with resistance to the spread of visual symptoms (Type II resistance) generally corresponding to resistance to DON accumulation (Type III resistance). However, the relationship between visual symptoms and DON is highly variable. Our goal was to evaluate the effects of cultivar on the FHB/DON functional relationship. Three experiments were conducted in two years, using three cultivars with different levels of Type II resistance (Truman, moderately resistant; Hopewell, moderately susceptible; and Cooper, susceptible). Plots were spray-inoculated with a spore suspension of F. graminearum at anthesis, and prior to maturity, 20 spikes were tagged in each of 11 FHB severity categories: 0, 1, 2, 3... 9, and 10 diseased spikelets per spike. At physiological maturity, tagged spikes were harvested, tested for DON, and F. graminearum biomass was quantified by amplifying Tri5 DNA using quantitative RT-PCR. Based on linear mixed model covariance analysis, there was a significant linear relationship between FHB and DON, with significantly difference regression slopes among the cultivars. Hopewell accumulated significantly more DON than Cooper and Truman, and based on the regression slopes, the rate of DON increase with FHB increase for Cooper was similar to that of Truman in two of the three experiments. Similarly, the rate of fungal biomass increase with increase in FHB was comparable between Cooper and Truman, but significantly higher for Hopewell.