Is Phytophthora cinnamomi a causal agent of oak decline in Southern Ohio? 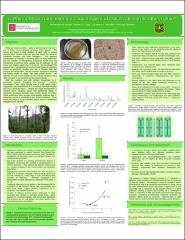 White oak (Quercus alba L.) plays a vital ecological role and is one of Ohio’s most important hardwood timber species. The decline and death of large numbers of white oaks in several southern Ohio forests during the past five years has therefore concerned foresters and land managers. The apparent concentration of mortality in low-lying areas or along waterways, and the isolation of Phytophthora cinnamomi Rands from the rhizospheres of declining oaks, suggest that this pathogen (a well known root disease agent) may be involved. We investigated the potential role of topography and environmental factors on pathogen activity by monitoring, monthly from July to October 2008, soil moisture, soil temperature, and soil inoculum densities in declining and healthy stands at Scioto Trail State Forest (STSF). We collected one pair of soil samples at each of three elevations along 120m transects in two declining and two healthy stands. Both soil moisture and total isolation frequencies of P. cinnamomi declined throughout the summer. Inoculum concentrations were highly variable even at small spatial scales, suggesting a patchy distribution of P. cinnamomi, although elevation was not a significant factor. Despite such high heterogeneity in inoculum levels, declining stands had significantly higher P. cinnamomi propagule densities than healthy stands (P=0.021). These preliminary data provide circumstantial evidence that P. cinnamomi may be a contributor in this decline syndrome. These results will need to be corroborated before rational management strategies can be devised.