Phenotypic Plasticity and the Invasiveness of Three Taraxacum Species 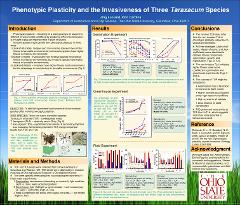 Many factors have been found to be associated with the success of invasive species. Phenotypic plasticity, the ability of a plant genotype to respond to different environmental conditions by producing different phenotypes, is thought to play an important role plant invasions. In three major experiments, I tested the hypothesis that the invasive Taraxacum officinale (common dandelion) and its non-invasive congener T. laevigatum will exhibit different phenotypic plasticity in germination, growth, and reproduction. I also proposed that their responses to various environments could be used to assess the invasive behavior of a potential crop species: T. kok-saghyz. The results revealed complicated responses of the three species in various environments. The invasive T. officinale showed higher germination in high alternating temperature, and accumulated more biomass than the non-invasive T. laevigatum in favorable greenhouse conditions. Surprisingly, T. laevigatum germinated better than T. officinale in other stressful environments (dark, low water potential, long aging period), and also exhibited higher fecundity in favorable greenhouse conditions. In field experiments, however, the performance of T. officinale was overwhelmingly better than T. laevigatum, which suffered very high mortality and failed to survive for more than two growing seasons. These results suggest that T. officinale might benefit from its ability to grow, reproduce, and survive in various environments, while T. laevigatum relies on seed reproduction to maintain its population. With the exception of germination, the responses of T. kok-saghyz were more like T. officinale than T. laevigatum, which suggested that this species has some potential to behave as a weed.