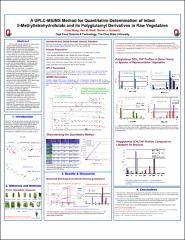 Folate is a B-vitamin essential for human health. 5-Methyl tetrahydrofolate (5MTHF) and polyglutamatyl derivatives thereof account for 75%-100% of folate in many fruits and vegetables although reliable data about intact folate forms is lacking. Quantitatively, determination of intact folate is often limited by complicated extraction and clean-up procedures as well as limited sensitivity of detection. In addition, sample handling and workup initiates enzymatic hydrolysis to mono- and short-chain polyglutamyl derivatives. Here we report a simple and complete extraction method and ultra-high performance liquid chromatography/tandem mass spectrometry (UPLC-MS/MS) for the determination of intact folate in vegetables. Samples (14 different vegetables) were steamed to inactivate enzymes and extracted in an ammonium acetate buffer containing ascorbic acid, beta-mercaptoethanol and 5MTHF stable isotope (internal standard, IS). The folate species were separated in 9min on a C18 column using a gradient of 0.1% aqueous formic acid/acetonitrile. UPLC eluate was interfaced with a triple quadrupole mass spectrometer operated in electrospray positive modeThe respective pseudomolecular cation of each 5MTHF species was selected for fragmentation to a 5MTHF fragment for detection. We profiled folates in vegetables from Brassicaaceae, Asteraceae and Amaranthaceae families of which most have not been profiled previously. Vegetables from Asteraceae and Amaranthaceae contained similar amounts of monoglutamyl and polyglutamyl 5MTHF species while Brassicaceae was dominated by polyglutamyls. The precision of the method was ≤9% RSD with 91% recovery and linearity from 0.25 nmol to 27 nmol 5MTHF. Further research will apply the method to monitor the formation of folate derivatives during food preparation and processing.