The Role of Source Trust in Priming 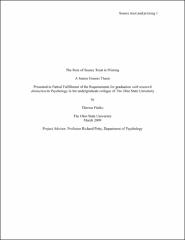 In a classic experiment, Srull and Wyer (1979) showed that when participants were incidentally exposed to a number of words related to a trait (e.g., hostility), their subsequent judgments of a target person were influenced by these primes. Recent work in social cognition, however, has shown that the use of accessible information can often be affected by cues to validity (e.g., Loersch & Payne, 2009). In the current research, we explored whether the attributional cue of trustworthiness could affect the impact of trait primes. The design of the study was a 2 (prime: hostile vs. kind) x 2 (source: trustworthy vs. untrustworthy). To test the hypothesis, participants read a paragraph about a fictional person written by either a trustworthy or untrustworthy source. While reading this information, participants were subliminally primed with one of two trait concepts. Then, participants made judgments about the fictional person’s traits. The results showed that trait priming interacted with source trust to affect participants’ subsequent judgments.