Was the Shawnee War Chief Blue Jacket a Caucasian? 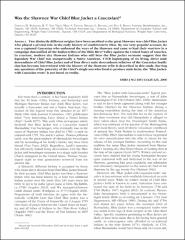 Two distinctly different origins have been ascribed to the great Shawnee war chief Blue Jacket who played a pivotal role in the early history of southwestern Ohio. By one very popular account, he was a captured Caucasian who embraced the ways of the Shawnee and came to lead their warriors in a campaign that unified all the Indian tribes of the Ohio River Valley against the United States of America. In contrast, modern day Shawnee Indians who still bear the Blue Jacket surname suggest that the legendary War Chief was unequivocally a Native American. Y-STR haplotyping of six living, direct male descendants of Chief Blue Jacket and of four direct male descendants/relatives of the Caucasian family that has become intertwined with the history of the Shawnee tribe is described in this study. Barring any questions of the paternity of the Chief’s single son who lived to produce male heirs, the “Blue Jacketwith-Caucasian-roots” is not based on reality.