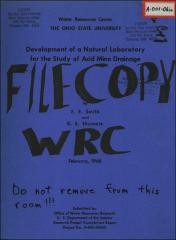 A small drift mine in Vinton County, Ohio, has been characterized and instrumented to permit a detailed study of the influence of oxygen concentration, microgiological factors, and hydrologic features on rate of pyrite oxidation within the system. This experimental mine will be treated as a pilot-scale reactor to obtain information in a natural environment on the kinetics of the reaction responsible for acid mine drainage. Six observation wells were dug and core samples taken at selected points surrounding the mine to establish ground water table and the aquifer supplying the mine. Base rate data of acid run-off as a function of water flow rate and water level in observation wells were collected. The mine was sealed and maintained under a slight positive pressure of nitrogen. Oxygen concentration dropped to less that 2 % in three months. When "sealed" in a conventional manner, the atmosphere in the mine never dropped below 10 % oxygen after being closed for several years. Acid run-off decreased approximately 50 % after six months under nitrogen pressure. The response time of the mine to imposed changes and characterization of reaction sites, in terms of physical and chemical environment, as well as location, are now being studied.