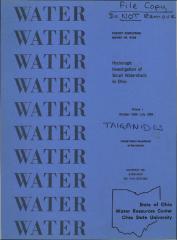 Traditional statistical, analytical techniques and deterministic models were used to study runoff phenomena from agricultural and strip-mined areas at the North Appalachia Experimental Watersheds Station near Coshocton, Ohio. Agricultural land use and surface strip mining were found to influence the hydrology of the watershed and the physical and chemical quality of the runoff water. Peak runoff rates were predicted using the standard formulas and with the Stanford and Purdue computer models. The latter were modified and input parameters had to be developed before using them. A basic study to better understand the fundamental phenomena and the mechanics of runoff were studied. Small watersheds were defined as watersheds whose hydrology is modified with agricultural and industrial practices on the land during a year's time.