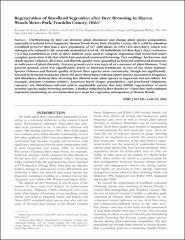 Overbrowsing by deer can decrease plant abundance and change plant species composition, especially in isolated forest fragments. Sharon Woods Metro Park, Franklin County, OH is a 308 ha suburban woodland preserve that had a deer population of 347 individuals in 1992 (112 deer/km2), which was subsequently reduced to the currently maintained level of ~40 individuals (14 deer/km2). Deer exclosures (~0.4 ha) established in 1990 in three habitats were used to compare vegetation that recovered under complete protection with that which had sustained continued browsing. Tree seedlings, herbaceous and shrub species richness, diversity, and floristic quality were quantified in browsed and fenced treatments as indicators of plant diversity. Percent ground cover was assayed as a measure of plant biomass. Total percent ground cover was significantly lower in browsed treatments in two of the three habitats. Species richness and floristic quality of forest floor species were consistently, though not significantly, lowered in browsed treatments where the more disturbance-tolerant native species increased in frequency and abundance. Reduced deer browsing has allowed some plant species to regenerate but not others. For example, pawpaw (Asimina triloba), American beech (Fagus grandifolia), and jewelweed (Impatiens capensis) are disturbance tolerant and/or unpalatable species that may inhibit regeneration of more sensitive species under browsing pressure. A further reduction in deer density to ~4 deer/km2 and continued vegetation monitoring are recommended next steps for vegetation management at Sharon Woods.