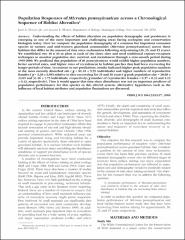 Understanding the effects of habitat alteration on population demography and persistence is emerging as one of the most important and challenging areas facing ecologists and conservation biologists today. Here we compare the population demography of a common but important consumer species in eastern and mid-western grassland communities (Microtus pennsylvanicus) across three habitats that differ in the amount of time since reclamation following strip-mining (30, 25, and 15 years). We established two 40 × 40 m plots at each of the three sites and used traditional capture-recapture techniques to monitor population size, survival, and recruitment through a nine-month period during 1999-2000. We predicted that populations of M. pennsylvanicus would exhibit higher population numbers, better survival rates, and higher rates of recruitment in habitat patches that had been recovering for longer periods of time. In contrast to our predictions, results indicated higher peak population numbers at the most recently disturbed site ( χ = 81.18 ± 9.59 individuals) and higher numbers of reproductive females ( χ = 3.38 ± 0.85) relative to sites recovering for 25 and 30 years ( χ peak population size = 28.08 ± 23.09 and 31.16 ± 1.75 individuals, respectively; χ number of reproductive females = 0.57 ± 0.32 and 1.13 ± 0.13, respectively). Thus it would appear that time since disturbance was not an important predictor of population performance for this species in this altered system. Alternative hypotheses such as the influence of local habitat attributes and population fluctuations are discussed.