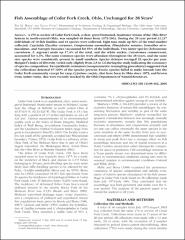 A 270 m section of Cedar Fork Creek, a clear, gravel-bottomed, headwater stream of the Ohio River System in north-central Ohio, was sampled 48 times from 1975-2003. During the 28 year period 32,237 individuals of 10 fish families and 44 species were collected. Eight taxa made up 86% of the total number collected. Cyprinids (Luxilus cornutus, Campostoma anomalum, Pimephales notatus, Semotilus atromaculatus, and Notropis buccatus) accounted for 65% of the individuals. Two darter species Etheostoma caeruleum, E. nigrum) made up 17.4% of the total, and the white sucker, Catostomus commersoni, accounted for 3.3%. The same common species were abundant throughout the 28 years, and the same rare species were consistently present in small numbers. Species richness averaged 23 species per year. Margalef’s index of diversity varied only slightly from 2.8 to 3.6 during the study indicating the constancy of species composition. Two jackknife estimators (nonparametric resampling procedures) suggested that the collections detected 97-100% of the species present. Exotic species failed to make inroads into the Cedar Fork community except for carp, Cyprinus carpio, that have been in Ohio since 1879, and brown trout, Salmo trutta, that were recently stocked by the Ohio Department of Natural Resources.